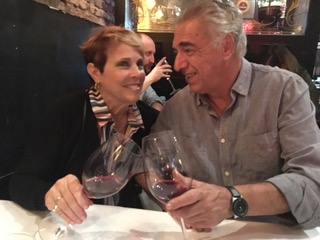 Joan and Argentine tango first crossed paths when she went to the theater to see Forever Tango in 1990’s. Loving dance, all venues, and wanting to engage in something new chose to attend tango lessons in Charlotte, North Carolina in 2004. Immediately caught in the “web of tango,” she signed up for a weekend in Raleigh, North Carolina and followed by a bigger commitment to begin more serious study with Claudio Asprea and Agustina Videla, who gave a seminar in Felingo Valdarno, Italy that same year.

From there it was the trek of most Argentine tango passionistas, festivals, group and private lessons, always learning and wanting more. She traveled to other countries, to include Italy, Russia, France, as well as several states in the USA to learn and practice the dance. She stayed under the tutelage of Claudio Asprea until his death, 2016. At this moment she had her first trip to Buenos Ares. Arrived December 3, 2016 to visit her friend Enrique Mora who moved there to study the dance and participate in the tango World Championship in 2017. It was on this day December 3rd., her life changed. At the suggestion of Enrique to walk over to ”Cheek to Cheek,” an afternoon tango practice, she met Carlos Stasi.  That meet turned into her South American residence Palermo, Buenos Aires, Argentina with Carlos.

In 2017 her life became a steady diet of attending Milonga, 4 or 5 times a week with Carlos. Joan became immersed in the BA tango venue, its orchestras, dancers, singers, and music.

In 2018 they took Porteno y Bailarin, Carlos’s 20 year milonga, which he and his partner, Jose Garofalo, opened in 2000, “on the road.” Traveling to USA and Europe. Dance classes with milongas were given in Italy, Poland and Germany.  This two month Spring road trip was repeated in 2019 and was extended to include cities in Argentina in the Fall 2019. Unfortunately the planned tour for 2020 was canceled because of the Covid-19 Pandemic.

In an effort to share and be proactive during this difficult moment for all who embrace tango, TANGO EXPANSION was created. The on line meets bring together those interested in tango lyrics and the life experience of Carlos Stasi. Class sessions provide English translations of tangos and discussion of Argentine slang, Lunfardo. Joan managers production and assists Carlos, the maestro.

In recent months Joan has taken up her brush, painting works arising from the Covid 19 pandemic. Tango has found its way into her work and believes it addresses a time of a different kind of expansion, one personal and one shared.

Joan Vitale and Juan Carlos Stasi married January 5th 2019. Their house became a home, a retreat for visitors to stay, and a place where music, dance lessons, dinners and tango passion is shared.