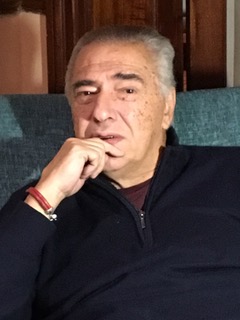 Juan Carlos Stasi may be described as a living encyclopedia of the history and culture of Tango. He was born November 2, 1953, in Buenos Aires, Argentina.  At 21, he entered the professional game of soccer, having spent his entire childhood focused on the ball. In 1985, after a time of personal growth, he became interested in the world of Tango.

Among his significant instructors was Carlos Gavito, whose approach to tango was to “make the lady a queen” and to “dance the silence.” Gavito was a major player in Stasi’s tango instruction. He was, and remains, his inspiration.

After Gavito, Stasi continued to learn to dance tango by watching Gavito’s videos, remembering what his tango Godfather said in the long intense conversations they had together. Before he passed away Gavito told Stasi to continue his method of tango.

Stasi has always loved to teach. He learned teaching methods in school when very young, and applied them later in life when he began to teach tango in 2004 with his partner, Susanna Guevara. Stasi’s approach is to identify for each individual what can be improved, such as taking one’s time, learning to use the pauses, listening to music, or mastering the embrace.

Stasi has inspired dancers most not by direct teaching, but by his influence and support of young dancers who he asked to perform at his 20-year ongoing milonga, ‘Porteno y Bailarin.’ Eighty percent of these dancers have become Tango World Champions.

Over the years, Stasi was close friends with many Tango greats, including Flaco Dany, Tete, Pupi Castello, Osvaldo Zotto, and Miguel Zotto.

Stasi is considered a preeminent tango historian. For some he may be considered eccentric as his whole world is tango. His personal stories and stories of other central tango figures are not found in books, at least not yet.

During his career, Stasi has helped many in the world of tango, Leo Ortiz, Yannina Erramuspe, German Vallejos and Magdealena Gutierrez, Roxana Suarez and Sabastian Achabal, Carla Rossi and Jose Calvo, and Clarisa Aragon and Jonathan Saavedra, among others.

He is a known Argentine actor who has appeared in: Esto es Tango, Fermin, El Acompanamiento, Sol de Otonio, Divertango and Tango en 78. He frequently recites Lunfardo poetry and has been, and continues to be, Master of Ceremonies for tango events. He has served several times as judge at “Mundial de Tango”, The World Tango Championship.

Juan Carlos Stasi continues his life in tango giving interviews on various topics for those interested in his encyclopedic knowledge.

Any time spent with Carlos Stasi will advance your understanding of dancing tango, so book your private lessons now while he is available in Buenos Aires.